I need to learn from Oprah... 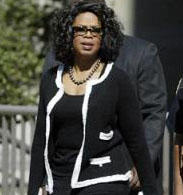 Okay, so is it really too much to want a talk show? Okay, well maybe not a talk show -- maybe a talk show meets MTv's boiling point meets Jackass. Just give me a TV camera, a crew, and let me go wild -- trust me the results would be entertaining. Well, at least to me... can't speak for the innocents in my path.

So what would I enjoy doing? I'd enjoy winning powerball, I'd enjoy traveling and telling people about it -- that is my passion and what I've done for the last year. I'd enjoy working my creative side (a lil background in marketing, pr, and advertising there) --- I'd enjoy going out... I'd enjoy rambling on and on. I'd enjoy helping people and making a difference.

It's really annoying. I mean, I gotta do something soon, my money won't last forever. Yet, it's hard to go from a year of being relaxed, traveling, and having fun to thinking "Ok what am I going to do that won't bore me..." Cause, ya know, employers can be really demanding of your time. Don't they know I have things to do. Bastards.

Then I just found out today that there is a gay TV Channel, owned by MTv, called Logo. I didn't know I got this gay Logo thing on my DirectTv! Channel 263 if you got DTv.

... which made me wonder why I don't have a show on there.

Why can't world domination just be easier. Hmm.. maybe I should talk to Bush about that..