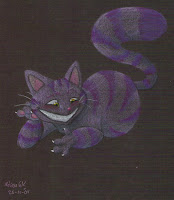 When your mirror speaks the truth to you, when the tides set into motion return.... I'll be awoken.
Posted by Scrappy at 3:56 AM 2 comments: