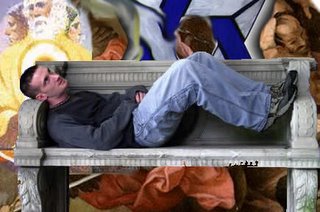 My life has been such an amazing journey. I feel peace in knowing that I have experienced it, have lived, that I've let go of the wheel and taken the ride for all it could be worth. Love, pain, happiness, loss, richness, destituteness, fears and having been fearless. To have touched the stars and fallen beneath the earth.

And yet while I ride out the journey.. while I experience the lows and highs of what life has given me and what I have taken hold of and brought from it .. I am always motivated and excited about the rebirth and the next experiences that are waiting for me.

There is no satisfaction in standing still, unless it is to catch your breath and begin to run again.

So now I look at the new journey ahead of me. The new job, the older projects on hold, and where I will end up next. Together, single, rich, poor ... here or somewhere new... it will be fun to explore.

The pages are now blank and the journey has begun again.
Posted by Scrappy at 5:40 PM 1 comment:

It's amazing what surprises life will bring you...

Last Wednesday I received a telephone call from the place where my last boyfriend was General Manager. It seems that since his death the store had taken a turn for the worse and the sales were not doing very well. The president of the company called me in to give her my 'opinions' and 'suggestions' for making the store successful again... and so I went. The place holds special meaning for me anyway.

The store was in bad shape. Obviously poor General Managers after my boyfriend. Nothing that cannot be corrected.

So we talked and talked... then she turns to the stores current district manager and says "Meet the new General Manager" and offered me a job.. at a rather impressive salary which was shocking.

So, I took it. It matters to me. Even though it is somewhat surreal and a little morbid that my dead boyfriend was GM there -- I took it to make it the way he had it. To see it bringing in 400-600k a year net profits again.

Thus the work began and I am happy to say in only one week sales are over last years. It's simple. The place isn't rocket science. It's established, profitable, and easy to work with.

This past Friday I met with the president again at another one of the stores.
We talked, went over new food samples, and just discussed where the stores had been in the formation of the company to where they are now. The company expanded too quick, acquired too much debt, and is now in a state where it needs to sell of the stores. So the stores are being sold to individuals, who are making out on the awesome concept and the fact that they are already established.

Then the next shocker hit me... she offered me to buy John's (my dead boyfriends) store. 700K financed by the company over a six year period, the other 300k down.

...yeah ummm there goes that because I think I have $93.89 in my bank account at the moment.

Potential buyers were in today... some jackass from New Jersey. I hope he hated it - I want that store fuckers.

Better me than some yahoo from NJ that knows nothing about it. Oh well.... everything for a reason. So I wonder where the reason is in all this?

I will keep going with it, to see what happens, working seven days a week to see the store succeed. The people that knew my boyfriend just stare.... I think they feel the same way I do. It's like he's walking around there again (we look a lot alike) -- it's strange and yet comforting at the same time.

The only true success in life are the positive impacts left on those you meet. Not money, not material things.. there is an impact left there and I will hopefully see to it that it remains.
Posted by Scrappy at 10:48 PM 1 comment: