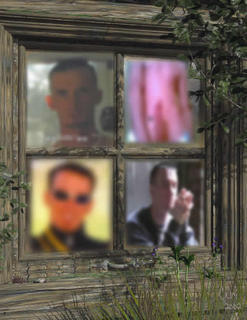 I've been told that I am not a very consistent person, or better yet, that my personalities seem to contradict themselves. This has led some people to assume that I am not particularly honest or sincere in the things I say or do.

I can't argue with them, it is true. My viewpoints are not black and white, except for a few select issues. So they are always in a constant stage of flux - things are based upon situation with me, rather than just a rock solid view.

It also means that what you get out of me one day, may change the next. Now I know this sounds like a very female type of mentality -- but trust me, I am all male. Don't you feel the testosterone throbbing through my veins as you read this?!

I'm sorta like a magic eight ball .. shake me around a little and wait for my personality to pop up. It's always a little bit of a surprise, but after you shake me enough, I am pretty simple to read.

I think it confuses people more when they try to get to know me on a dating level. To meet me out in a public setting is an entirely different energy -- I'm extremely talkative, flirtatious, out going, fun, lite-hearted, and I can pack one helluva presence (if i say so myself..).

However, get me home - or take the time to speak with me for more than 30 minutes - and you'll find that I'm incredibly deep, rather serious, sensitive (shh, don't tell anyone, you'll ruin my image), and emotional.

I guess I just blend, to an extent, with my environment. There's no point in going out and being a serious, emotional, sensitive person throwing back a Killians Draft.

I hope this doesn't put me in the same category as the people I talk about. I've always said that people should be forced to wear disclaimers. I wish my last boyfriend did, it would have saved me a lot of heartache. You know, like a little sign that reads: "Warning, every second word is a lie." or "Cannot keep dick in pants!" At least then you'd know what you were up against prior to starting.

I probably wouldn't even be writing this down if it weren't for the fact that it's now 9:39 and I have to keep myself awake till 11:00am to drive to the airport. I'm running out of ways to occupy myself. I've played The Sims2, made a new city in Sim City 4, and have killed many a bad guy in Xmen on my PS2 -- so now that I am out of gamer-geek mode .. I figured let me just write some more...

Lack of sleep and long drives have always been times of heavy reflection for me. This time I'm reflecting on past relationships and how my "wild & crazy" public persona has lead to disappointment in people when they got to see the more serious and indepth side of me.

A lot of people don't seem to like serious and indepth, with a twist of craziness thrown in.

Me, myself.. I like it in people. It's a nice mix. Kinda like ChexMix in a way.. a lot of different flavors. Some taste a little better than others, but overall, the entire package tastes good.

Gotta love the mind of a man without sleep.. ;)