My life as a pornographer... 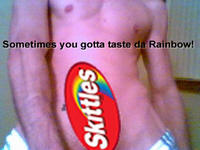 I think we all strive for that rainbow. I strive more for a bag of skittles, it tastes better. I think it does at least, I've never actually put my tongue on a rainbow of any other kind.

Nine years ago I was in a very different place than I am now. I ran an online community for adults and had several guys working for me doing live internet stripping. This was when live webcasts were new and exciting. I also produced some print material, too.

Then it happened. While visiting a local strip club in Baltimore (now long gone..) looking for new talent I ran into THE guy. The one that would become my boyfriend for seven years, even though I expected it to be forever.

Shortly after meeting him, I stopped the whole adult thing. It just isn't, in my view, something that's appropriate for a relationship. So, as quick as I started it -- i ended it and focused solely on our relationship and "normal" employment.

A few years later and rather bored, I took that adult site -- the software that powerd it and turned it around. You see, I have a rather deep desire and interest in community things and helping make positive change. So why waste good software and money invested in it? Instead, I put it to good use and made a new online community. I ran that for five years, even ended up opening a small store in a mall because of it. It had a great impact on the people it reached and was definitely (next to my boyfriend) the largest and happiest part of my life.

Then, like it seems to do, the unexpected happened. My boyfriend was killed in a car accident. Within thirty seconds my entire life changed. Without warning, preparation... so much for giving notice, eh? I found myself standing in the middle of a busy mall, on the telephone (being told of my boyfriends death - later to find out I was told 7 hours past the fact) crying, yelling, unable to stand and squatting on the floor.

I have to give props to the little girl who walked by with her family. It's amazing how little things can have a huge impact. She just casualy looked over, tilted her head and with a serious (but sad) expression said "Don't be sad, don't cry." and kept walking. I don't think that little five or eight year old girl will ever know the impact that had.

So .. that ended the five years of that business. I just couldn't cope at that point, which in hindsight I regret. Believe me, regret is a word I very seldom use.

I closed up shop, shut down the community and off I went on a journey of self healing that would see me in several different states, back and forth cross country, and over into Europe.

Now, I am here. At the end of that particular journey and at the begining of a new one. Not as lost as I was before, but not exactly sure of my direction either.

I believe life is like one of those little gyroscope etch-a-sketch kinda things. A series of various circles, interlapping, yet ever expanding... so, at this point of that circling thing, I've come full circle --

I am debating doing pornography again. The laws have changed, so it'll be more work on the record keeping end, but the money it brings would be an incredible blessing right about now. I should have been a little more thoughtful to what I was spending during the year of traveling sanity.

It sounds wonderful. I have everything I need to accomplish the task, including new talent all ready and waiting to go. The only problem now is that my values and morales have changed.

At least with the homeless shelter I'd be doing something good and beneficial for people.

When the money is rolling in and my bank account is hitting the nice triple digets before the comma again.. perhaps I wouldn't care. I think I would though. Money is not everything, not to me.

Oh to have done things differently when my boyfriend died. To have been strong enough and focused enough to keep the store and site running. That's pointless discussion though, because it's done.

Hmmm.. interesting thought. It's not unlike me to shake things up and mix things together that usually wouldn't be mixed.

I'm just not sure.