Flame On and Excuse me, sir? 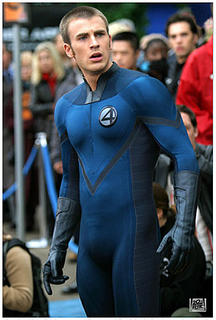 Today (well Friday..) I was sitting around, somewhat hung over, just playing online and doing nothing productive when I got the call to go assist a friend of mine. Since this is a guy I've been seeing and someone who I enjoy being with - I jumped at the chance, got a quick shower, and was off on the mission.

After taking care of what needed to be done, he took me out for dinner. It's just a lot of fun to be with him. The conversation is always nice and fluid -- even when there is silence, it's not one of those uncomfortable kinds.

After dinnner we ended up going to the movies and watching Fantastic Four (it was my turn to pick lol). For a comic gone movie, it wasn't bad at all. Not as good as X-Men, but definitely not bad. Of course, now I see why every gay person I know says the movie is "HOT!" 24 year old Chris Evans does add a little eye candy to it and you know the producers were sure to have him as naked as possible, whenever possible. Or in an overly tight, catwoman-esque, revealing outfit. With or without him, though, the movie was fun to see.

If you want to talk about hot .. you should have seen who I was with. He's an incredibly attractive guy (inside and out), but tonight - for some reason - while we were trying to find our cars I had to just stop and look at him. Everything about him.. the way he moved, his stance, face, eyes, body... everything was so beautiful that it was breath taking. It's not as though he looked any different tonight, than other times I've seen him, but there was just something -- and that something was amazing.

Beyond that, he's just great to hang out with. No matter what my mood may be prior to seeing him, I am always left feeling happy and uplifted when it's time to say goodnight. It's just a really nice feeling.

Another thing happened on the way to the cars though, that had me wondering during my drive home. There was this woman trying to get my (or our) attention. She said "Excuse me, sir." a few times, but I was too involved in watching who I was with that I couldn't change my focus.

Now I wonder about her. Did she need something? Was she okay? Did anyone else take the time to care enough to listen to her or inquire about her needs?

I looked back at her a few times.. pausing... debating if I should go back and ask, but I didn't.

People still do laugh at me when I tell them that was my aspiration. They've also laughed at me when I've had a tear or two fall when seeing a homeless person sleeping on the street. Or, better yet, when I see a really fat kid ... knowing that people probably tease them and humiliate them.

There is this 'homeless' woman named Jackie who hangs outside of Central Station (a gay bar in Baltimore MD) a lot. I wonder how many other people know or remember her name. I've watched people coming out of the bar, who she has very politely (or as polite as you can) asked for help, be rude - demeaning - and at times almost violent with her. Infact, one of those episodes had me being almost violent with the fucking queen that was talking shit to her.

I've taken the time to have her sit and talk to me. I do that with a lot of people I encounter on the street, as odd as that may sound. Yet to talk to her is enjoyable, enlightening, and sometimes inspiring. Her mind is excellent and while she may not have the best appearance -- there's a sparkle in her eyes that says a lot for who she was, is, and could be.

Now I know that there are some people asking for 'help' who are ignorant, demanding, threatening. There are probably some doing it that probably live better than most of us, off abusing the compassion of others...

Yet, I can't help but feel an empathy and deep rooted desire to help. It's like I want to lift them up, dust them off, and set them on a higher ground. I can't however, so they only get whatever I have available in my wallet at the time.

Inside though -- my heart aches and I wish I could change it or provide the resources to help them regain control over their lives.

I really can't do that, not now at least. So I do what I can. I take the time to listen, to let them know their voice matters ...

I take the time to be compassionate.